After writing six books featuring a librarian as an amateur detective, I’m happy to see that I’m not the only one who thinks librarians make good detectives.

Why Librarians Are Natural Born Detectives

With this post I’m sharing an another fact I learned by writing fiction. This one is from book three in my Aimee Machado Mystery series featuring a health sciences librarian. The mystery in BREACH OF ETHICS centers around a famous ten-year-old piano prodigy. The young girl falls ill from being restricted to a faulty vegan diet. This leads Aimee to wonder if an ongoing battle for the girl’s custody led to murder. Here’s what I learned by researching story details involving vegan diets for children.

BOOK THREE QUESTION:
Can young children fall ill or even die as a result of a faulty vegan diet?

FACT:  The answer is yes, and a national survey found that nearly 20 percent of people surveyed about knowledge of vegan diets for children were unaware that it was a risk. 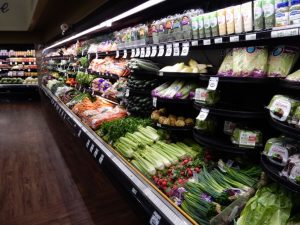 A young child restricted to a faulty vegan diet by well-meaning parents who are not sufficiently informed is at risk of failure to thrive and may not grow at a normal rate. Leafy greens are not enough. The child may develop a broad range of health problems due deficiencies in amino acids, calcium, vitamin D, and B12.

rtunately for vegan families, B12 is readily available in meat and animal-based foods, but not in a plant-based diet. With malnourishment, there is risk of rickets and even more dire consequences. Lack of B12 can cause brain damage and even heart failure, so vegans must acquire this essential vitamin through fortified foods or supplements.

Although vegan diets are in many respects very healthy, they are more likely to cause nutrition problems for children than for adults. Any family contemplating a vegan lifestyle for young children would be well-advised to consult a qualified nutritionist before beginning.

For information on vegan diets and B12, visit The Vegan Society at: https://tinyurl.com/ya9k3qay

Books in the hospital-based Aimee Machado Mysteries are published by Camel Press (an imprint of Epicenter Press) and are available for purchase from Amazon, Barnes and Noble, and from your local bookstore in trade paperback and as ebooks. http://camelpress.com

As a fiction writer, it always surprises me when people say they don’t read fiction because it isn’t real. They read only nonfiction, because they’re more interested in facts.

After hearing yet another nonfiction reader express that notion, I found myself thinking of the many interesting facts I’ve learned by writing fiction, and in particular, researching my mystery series featuring a health sciences librarian.

Librarians are trained researchers. If they’re curious, they look things up. I’d like to share some of the notable facts I’ve come across while my protagonist searched for the solutions to mysteries in the first four books in the Aimee Machado Mystery series.

To keep the list brief, I’ll offer only a small sampling from each book, serving them up one book at a time.

BOOK ONE –  DUE FOR DISCARD

QUESTION ONE:
How many professional journalists are killed in the line of duty within a given year?
FACT:  Thirty-four journalists have been killed so far in 2017. The deadliest countries are: 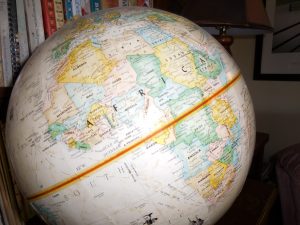 BOOK ONE – QUESTION TWO:
How much does it cost to have a pet preserved cryogenically? 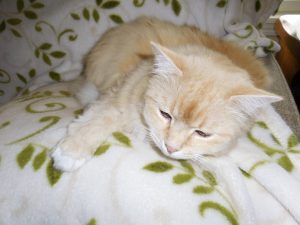 FACT:  According to the website of one pet cloning and cryogenics company, the cost of cryopreserving a cat is $5,800. For a dog, cryopreservation cost is $5,800 up to fifteen pounds in weight plus $150 per pound for every pound above fifteen. For a pet bird of typical size, the charge is $1,000.

Disclaimer: While the cost is a fact, this author does not vouch for the legitimacy of the service being offered.

The hospital-based Aimee Machado Mysteries, published by Camel Press, are available for purchase from Amazon, Barnes and Noble, and from your local bookstore in trade paperback and as ebooks.

Today on the Sharon St. George website I’ve invited the protagonist from my Aimee Machado Mystery series to post a story about life in fictional Coyote Creek, where she lives with her fictional boyfriend and her fictional grandmother and step-grandfather. 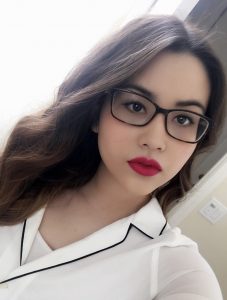 My name is Aimee Machado. My boyfriend, Nick Alexander, and I live in a ranching community in Northern California called Coyote Creek. Our apartment is a converted bunkhouse over my grandparents’ llama barn.

I’m a hospital librarian at Timbergate Medical Center, a few short miles from where we live, and Nick is a corporate pilot. But when we’re at home, we’re all about country life.

Sometimes it’s just routine, like helping my grandmother Amah and her husband, Jack, feed and care for their llamas and turkeys. Other times, something a little different comes along.

Like last weekend, when Amah was out of town visiting her brother, and Nick was away flying his billionaire boss to meetings in another state. I was enjoying a relaxing evening, watching Hugh Jackman in Logan, when Jack knocked on my door.

“Aimee, the setting hen just left her nest with three of her hatchlings. Come help me catch them before they scatter. She needs to be caged with them for a while, or they’ll fall victim to all sorts of predators.”

I paused my movie, reluctantly, I admit, and headed out to participate in a poultry roundup. We caught the three little ones easily, and settled them in a large, roomy cage with their mother hen. Jack provided food and water, and I thought we were finished. Back to Logan.

No such luck. Jack had checked the hen’s vacated nest and found one egg still there. The egg was pipped, which meant the poult was still inside, trying to get out, but it was too late to put the egg with the hen. As far as she was concerned, her incubating time was over. She had three offspring to take care of, and she had moved on.

Jack took the egg to the main house, put it in a box and set a lamp over it, hoping once the little one broke out, we could take it to its hen. But nothing was happening. After a few hours, Jack decided to assist by opening the shell himself. The poult was alive, but feeble and floppy, as newborn turkeys usually are for the first few hours.

“This has happened before,” Jack said. “Your Amah usually puts the little one under her shirt next to her heart for a few hours. Then when it’s strong enough to walk on its own, we give it to the hen.” He gave me a meaningful look. Would I volunteer?

“Does that always work?” I asked. “I thought the hen wouldn’t take a baby that had been handled by humans.”

“Not true, at least not with our turkeys,” Jack said. “We’ve done it successfully a few times before. Mama hen and baby both have a strong, instinctive desire to connect.”

I’ll skip to the finish and tell you that the little one came along just fine. After a few hours of cuddling next to my heart, it could stand and run around with sufficient strength that we were able to put it in the cage, reunited with the rest of its family.

Now, back to Logan. He and his fellow mutants have performed amazing feats over the years, but have any of them played nursemaid to a baby turkey? I think not. 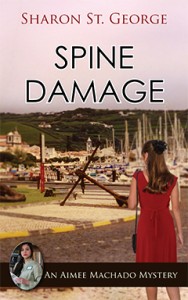 To see what Aimee and her crime-solving cohorts are up to these days, have a look at Spine Damage, the newest release in the Aimee Machado Mystery series. If you’re not sure where the Azores Islands are, you’ll know all about this nine-island archipelago by the time you’ve taken an armchair trip there with Aimee and Nick.

“There are many well-researched crime and medical details which lend authenticity to the novel . . . Readers who enjoy detailed world and character building with sweet romance will thoroughly enjoy Spine Damage.” —Claudette Melanson for InD’Tale Magazine