In a temporary lull between final edits of the fourth book in my Aimee Machado Mystery Series, and working out the plot of book five, I found myself tempted to take a plum role in a local theater production of Ken Ludwig’s Edgar-winning play. The Game’s Afoot, or Holmes For the Holidays.

Several years had passed since I last trod the boards, and I had spent those years following my dream of becoming a published mystery novelist. Once that dream became a reality, I thought I had conquered my addiction to live theater. I was confident that I could take on this role, strictly as a favor to the director, of course, and when the run was over, I’d go back to my keyboard and my life as a mystery novelist.

And that’s exactly what happened, but something else happened along the way. I discovered that fiction writers and actors are very much alike. One of my fellow cast members made a remark in the green room about her long-ago desire to write fiction. She said she gave it a try, but everything she wrote seemed stiff, so she decided she wasn’t a writer and gave it up. Hearing her say that made me sad that she had given up so soon, because I recalled going through that same experience. Not only in writing fiction, but in my first attempts as an actor. Stiff. Self-conscious. Blah. I wasn’t “gifted” with spontaneous ability in either art form, so why even try?

For me, the reason to try acting was the feeling, when I attended live theater productions, that I didn’t belong in the audience. I couldn’t stop thinking I belonged on the stage. It wasn’t until I was an adult that I realized where that feeling came from. As a two-year-old, I was signed up for dance lessons by my mother, and for the next ten years, I was always on stage, never in the audience. First came the hula, then Spanish dancing, rumba, tap, and ballet. Finally, when it became clear that I did not have the feet of a ballerina, my dancing years came to an end. Instead, I turned first to live theater, and then to writing fiction. 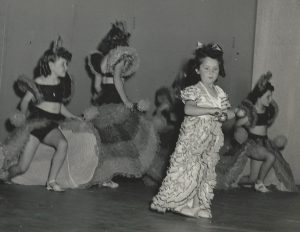 After my recent return to acting, it struck me that fiction writers are, in a sense, actors who play all the parts. In theater, we actors usually create only one character—the role we were cast to play. We start with a script, and within the context of the story, we gain some idea of what our character is like. But we must bring that character to life with attitude, emotion, personality quirks, a past, and best of all, a secret. We do everything we can to flesh out that character on a live stage and to give the audience something to understand and relate to.

In writing fiction, we do the same, but instead of creating just one character, we create all of them. In our writing space, we put our physical bodies in a chair and tap a keyboard. But in our minds, we’re becoming any number of living, breathing people. We know what they look like, sound like, think like, and act like. Are they sane or crazy? Healthy or ill? Happy or sad? If we’re doing our characters justice, we could step into any of their skins and take them on a stage, fully formed and ready for an audience who will see them as we do in our minds.

In SPINE DAMAGE, book four of the Aimee Machado Mystery Series, Aimee and Nick are on their way to the Azores to hunt down clues to a missing teenage girl who vanished after attending a party on a luxury yacht. They stop off in Boston to visit Aimee’s grandfather, an actor who is appearing in a Boston theater’s production of BUS STOP. Although they enjoy the play, the mystery surrounding the girl’s disappearance deepens, and solving it becomes a deadly race against time. SPINE DAMAGE is due for release on May 15, 2017.