While writing Primary Source, the fifth book in the Aimee Machado Mystery series, I was surprised to discover that many cadaver dogs and their handlers are volunteers. This fascinating topic led to further research and another chance to share facts I’ve learned by writing fiction.

Why does law enforcement rely so heavily on volunteer cadaver dogs? It’s usually a matter of cost. Human remains detection dogs are specialists and are not needed on a daily basis the same way a regular K9 patrol dog is used. Many smaller law enforcement agencies do not have the funding to train and maintain a cadaver dog that may be used only a few times a year.

And just how are those cadaver dogs trained? Most canines take around 18 months to two years to be fully trained. While they are often Labrador retrievers or German shepherds, the breed is not as important as a dog with the requisite traits: good energy, ability to focus, obedience and a good nose. Depending on the breed, a dog’s sense of smell is around 100 to 1,000 times greater than a human’s, but the dog still needs direction and training. 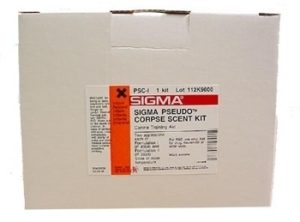 Here’s a term I had not heard until I began this research: pseudo corpse scent. Yep. It’s just what you think: an ersatz odor created to mimic the scent of death. It comes in three different formulas: recently dead, decomposed, and drowned.

However, some expert trainers recommend using the real thing, because human blood has unique organic compounds. Sometimes searches involve dangerous areas like collapsed buildings. Before risking injury to themselves or their dogs, handlers want to be certain the dog is hitting on human remains rather than a dead stray animal, or even a pet. It is legal in the U.S. to obtain bodily components like human placenta and blood, but that is not always easy, so some handlers resort to using their own blood for training purposes.

The dog is often trained to associate the smell of death with its favorite toy, and when ready, it should be trained to search night or day, in various kinds of terrain, from wilderness to rural farmlands to the concrete environment of urban settings. The scent of death could be old dry bones or even a death as recent as one hour before the search began. When the canine discovers the source of the scent, it should sit or lie down calmly. Digging, jumping around, or even urinating could destroy evidence.

Dog owners interested in volunteering to train their animals for this work might benefit by forming relationships with their local law enforcement agencies. Handlers should be physically fit and able to pass background checks. Other important skills include working with maps and GPS. They must also have the disposition to remain composed no matter what their dog might uncover.

Visit the links below or use the keywords “human remains detection dogs” or “cadaver dogs” to search for more information on this topic. 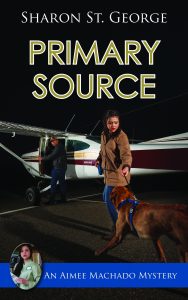 ry Source, the fifth book in the Aimee Machado Mystery series, Aimee and Nick are assisted in their search for evidence by Ginger, their Chesapeake Bay retriever recently trained as a volunteer Human Remains Detection Dog.

All of the books in the series are available online in paperback and eBook formats from Amazon and Barnes & Noble, and by order from your local bookstore. The series is published by Camel Press, an imprint of Epicenter Press in Kenmore, Washington